The airport administration office is open Monday through Thursday from 7:30 a.m. to 5:30 p.m., and closed on Fridays, weekends and holidays.

The following documents are in Adobe Acrobat PDF format.

Anyone interested may view a copy of this document in the airport’s administrative office, Monday through Thursday, from 8:00 A.M. to 5:00 P.M.

Why are there more passengers flying into and out of Palm Springs International Airport (PSP)?

The answer to this question is best illustrated by the Greater Palm Springs Convention and Visitors Bureau study about the significant impact of tourism on the economy of the nine-city Coachella Valley. Please click on this link to see this study.

Is it accurate that Palm Springs International Airport is growing and how big will it get?

PSP has grown over the last decade.  That growth is best identified in terms of airline passengers flying into and out of the airport.  Calendar year 2020 is forecast to be another record year with about 2.5 million passengers serviced through ten airlines.  What is important to point out is that although passenger activity is growing, the actual number of aircraft flying in and out of the airport has remained relatively stagnant.  This is because the airlines are operating with higher load factors (more passengers per aircraft) and increased aircraft size from the 50-70 seat regional jet to the 130-150 seat medium jets.  This results in fewer flights arriving and departing and less impact to surrounding communities.  The following data chart illustrates how during the 2013 to 2018 period, the total number of aircraft (airlines + corporate + general aviation + military) trended.

Why is it that we often hear news about the airport expansion?

What has been in the news about PSP are ongoing existing facility improvements, not expansion of the runways for aircraft to land on.  There is no need, nor are there plans, to expand the airport’s airfield because its utilization rate is well below capacity.  The only components of the airport that have been identified as needing capacity enhancements in the near future are the structures that process passengers, including the main terminal scheduled for a modernization of the ticketing wing in 2020, the construction of a new car rental facility expected to be completed within about four years; the remodeling of the terminal’s baggage claim area in about four years, and some additional gates at the regional concourse for passengers to wait for their flights.

The military fly the noisiest aircraft.  Why do they use the airport and can we stop them from using PSP?

We agree that the military flies some aircraft that are very noisy.  Military use of PSP is not new.  The airport originated from a military airfield.  During World War II, the Army constructed the airfield here, and after their use, the City of Palm Springs took possession of the airport in 1961 and converted it into a municipal airport.

Since then, the federal government has provided tens of millions of grant funding from the Federal Aviation Administration to help construct runways, lighting systems, a control tower, and facilities to tie the airport into the nation’s airport system plan, therefore, there is a standing requirement that the federal government be allowed to use it.

Operating U.S. military aircraft must be allowed at PSP and the military does take advantage of that, as they do at other airports around the country.  Not only does the U.S. military use commercial airports around the country, in many instances they have military bases on the airport property.  PSP does not have any based military facilities or aircraft, but it does experience military aircraft flying in and out to fuel, rest stop, or make a practice approach.

If you cannot deny the military use of the airport, why can’t you at least tell them when they can operate?

As explained in the previous answer, we cannot prohibit the military from using the airport when they need to.  However, we do convey messaging to the military to avoid noise sensitive hours and, overall, we believe they have been responsive to that request by keeping most operations during the daytime.

How do I file a complaint about a specific aircraft noise incident?

The Palm Springs International Airport maintains a noise complaint line, (760) 318-3800 ext. 5276, available to any citizen that wishes to voice a complaint about a specific aircraft noise incident or incidents.  This line allows any Coachella Valley resident to leave a recorded message, so please include your name, address, phone number and the date and time of the event so that we can log the information into our data base.    If requested, airport operations staff personnel will attempt a return call whenever possible.   For those who do place a call to the noise line, please include more detail about the event, if possible, including the type of aircraft, color of aircraft, description or tail number of the aircraft.

There are periodic helicopter flights occurring at different hours of the night.  What is the reason for this?

Helicopters are much more versatile than fixed wing aircraft.  For this reason, law enforcement, ambulance services, hospitals, utilities, and other types of industries use helicopters for a variety of special purposes. These include police related matters, emergency medical transportation, community health, utility power outages and repairs, and other types of utilitarian activities that can develop at any hour of the day and night and usually do not originate or terminate at PSP.

It is not unusual for PSP to receive calls regarding helicopter noise issues that have been generated by activity not utilizing the airport.  We do not control or have influence over helicopter flights that do not involve our airport.  We do know, however,  that some helicopter operations that are brought to our attention serve the Desert Regional Medical Center as medical evacuation flights.  If you have a specific concern about these flights, usually occurring in the Indian Canyon and Tachevah neighborhood corridor, please contact the hospital directly at (760) 323-6524.  Thank you.

Helicopter pilots, click on links below for Good Neighbor Information

Military Aviators, click on link below for Good Neighbor Information 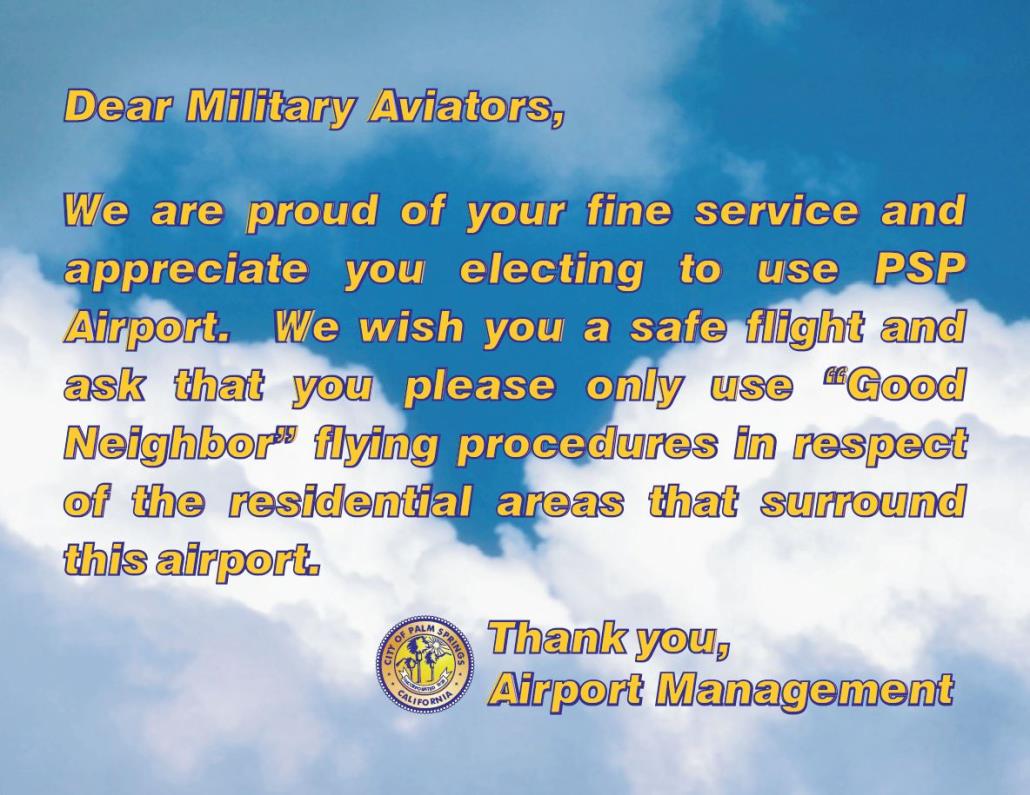 Palm Springs International Airport is managed by staff from the City of Palm Springs and is provided advisory direction from the Airport Commission. This nineteen-member body is made up of representatives from cities throughout the Coachella Valley. The Commission meets on the second Wednesday of each month at 8:00 a.m. in the airport conference room located on the mezzanine level of the airport terminal.  Meetings are open to the public and parking is validated.

Airport Commission Meetings are broadcast on YouTube and on Channel 17 at the following times: